Enjoy complimentary shipping on all orders over $80 (Australia) Romans began making dipped candles from tallow, beginning around 500 BCE. While oil lamps were the most widely used source of illumination in Roman Italy, candles were common and regularly given as gifts

After the collapse of the Roman Empire, trading disruptions made olive oil, the most common fuel for oil lamps, unavailable throughout much of Europe. As a consequence, candles became more widely used. By contrast, in North Africa, and the Middle East, candle-making remained relatively unknown due to the availability of olive oil.

Candles were commonplace throughout Europe in the Middle Ages. Candle makers (known as chandlers) made candles from fats saved from the kitchen or sold their own candles from within their shops. The trade of the chandler is also recorded by the more picturesque name of "smeremongere", since they oversaw the manufacture of sauces, vinegar, soap and cheese. The popularity of candles is shown by their use in Candlemas and in Saint Lucy, festivities. Tallow, fat from cows or sheep, became the standard material used in candles in Europe. The unpleasant smell of tallow candles is due to the glycerine they contain. The smell of the manufacturing process was so unpleasant that it was banned by ordinance in several European cities. Beeswax was discovered to be an excellent substance for candle production without the unpleasant odour, but remained restricted in usage for the rich and for churches and royal events, due to their great expense.

In England and France, candle making had become a guild craft by the 13th century. The Tallow Chandlers Company of London was formed in about 1300 in London, and in 1456 was granted a coat of arms. The Wax Chandlers Company existed prior to 1330 and acquired its charter in 1484. By 1415, tallow candles were used in street lighting. The first candle mould comes from the 15th century in Paris.

With the growth of the whaling industry in the 18th century, spermaceti, an oil that comes from a cavity in the head of the sperm whale, became a widely used substance for candle making. The spermaceti was obtained by crystallizing the oil from the sperm whale and was the first candle substance to become available in mass quantities. Like beeswax, spermaceti wax did not create a repugnant odor when burned, and produced a significantly brighter light. It was also harder than either tallow or beeswax, so it would not soften or bend in the summer heat. The first "standard candles" were made from spermaceti wax.

The manufacture of candles became an industrialised mass market in the mid 19th century. In 1834, Joseph Morgan, a pewterer from Manchester, England, patented a machine that revolutionised candle making. It allowed for continuous production of molded candles by using a cylinder with a moveable piston to eject candles as they solidified. This more efficient mechanized production produced about 1,500 candles per hour, (according to his patent ". . with three men and five boys [the machine] will manufacture two tons of candle in twelve hours"). This allowed candles to become an easily affordable commodity for the masses. 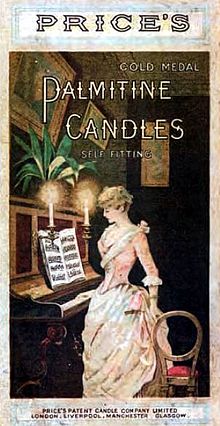 At this time, candlemakers also began to fashion wicks out of tightly braided (rather than simply twisted) strands of cotton. This technique makes wicks curl over as they burn, maintaining the height of the wick and therefore the flame. Because much of the excess wick is incinerated, these are referred to as "self-trimming" or "self-consuming" wicks.

In 1848 James Young established the world's first oil refinery at the Alfreton Ironworks in Riddings, Derbyshire. Two paraffin wax candles were made from the naturally occurring paraffin wax present in the oil and these candles illuminated a lecture at the Royal Institution by Lyon Playfair. In the mid-1850s, James Young succeeded in distilling paraffin wax from coal and oil shales at Bathgate in West Lothian and developed a commercially viable method of production. The Paraffin wax was processed by distilling residue left after crude petroleum was refined.

Paraffin could be used to make inexpensive candles of high quality. It was a bluish-white wax, burned cleanly, and left no unpleasant odor, unlike tallow candles. A drawback to the substance was that early coal- and petroleum-derived paraffin waxes had a very low melting point. The introduction of stearin, discovered by Michel Eugene Chevreul, solved this problem. Stearin is hard and durable, with a convenient melting range of 54–72.5 °C (129.2–162.5 °F). By the end of the 19th century, most candles being manufactured consisted of paraffin and stearic acid.

By the late 19th century, Price's candles, based in London was the largest candle manufacturer in the world. The company traced its origins back to 1829, when William Wilson invested in 1,000 acres (1.6 sq mi; 4.0 km2) of coconut plantation in Sri Lanka. His aim was to make candles from coconut oil. Later he tried palm oil from palm trees. An accidental discovery swept all his ambitions aside when his son George Wilson, a talented chemist, distilled the first petroleum oil in 1854. George also pioneered the implementation of the technique of steam distillation, and was thus able to manufacture candles from a wide range of raw materials, including skin fat, bone fat, fish oil and industrial greases.

Despite advances in candle making, the candle industry declined rapidly upon the introduction of superior methods of lighting, including kerosene and lamps and the 1879 invention of the incandescent light bulb and in the 2000s with faux candles and lanterns using LEDs.

From this point on, candles came to be marketed as more of a decorative item. Candles became available in a broad array of sizes, shapes and colors, and consumer interest in scented candles began to grow. During the 1990s, new types of candle waxes were being developed due to an unusually high demand for candles. Paraffin, a by-product of oil, was quickly replaced by new waxes and wax blends due to rising costs.

Candle manufacturers looked at waxes such as soy, palm and flax-seed oil, often blending them with paraffin in hopes of getting the performance of paraffin with the price benefits of the other waxes. The creation of unique wax blends, now requiring different fragrance chemistries and loads, placed pressure for innovation on the candle wick manufacturing industry to meet performance needs with the often tougher to burn formulations.